While we were busy coping with the new normal during the early days of the national lockdown, Amazon revealed that some Indians took support from Alexa to find normality in the tough time. The company said that the virtual assistant, which competes against Google Assistant and Apple’s Siri, saw significant shifts in the user behaviour starting March — the time when we started keeping us indoors to avoid the coronavirus infection. It was asked to help in daily workouts and enhance linguistic skills. And (in a now unsurprising development), some users even proposed to Alexa.

Amazon shared some insights with Gadgets 360 that were recorded between March 1 and May 31 to detail how engagements with Alexa changed during the lockdown. The company claimed that Alexa received thousands of requests every minute. However, it wouldn’t reveal the actual number of users who accessed the voice assistant.

As people started their fitness routines from home, Alexa saw a threefold increase in requests for workout music, Amazon said. It also reminded users to drink water or take their medication.

In addition to workout music and medication reminders, Amazon said that Alexa was embraced by people for its audio game playing experience, with its Song Quiz, Fact or Fib, and Snake and Ladders skills witnessing a fourfold spike in usage. There was also threefold increase in queries asking for nursery rhymes as children — along with their parents — weren’t stepping out. Similarly, Amazon mentioned that one in five users engaged with educational skills such as “Word of the Day”, “1-2-3 Math”, and “Pearson Mypedia”. 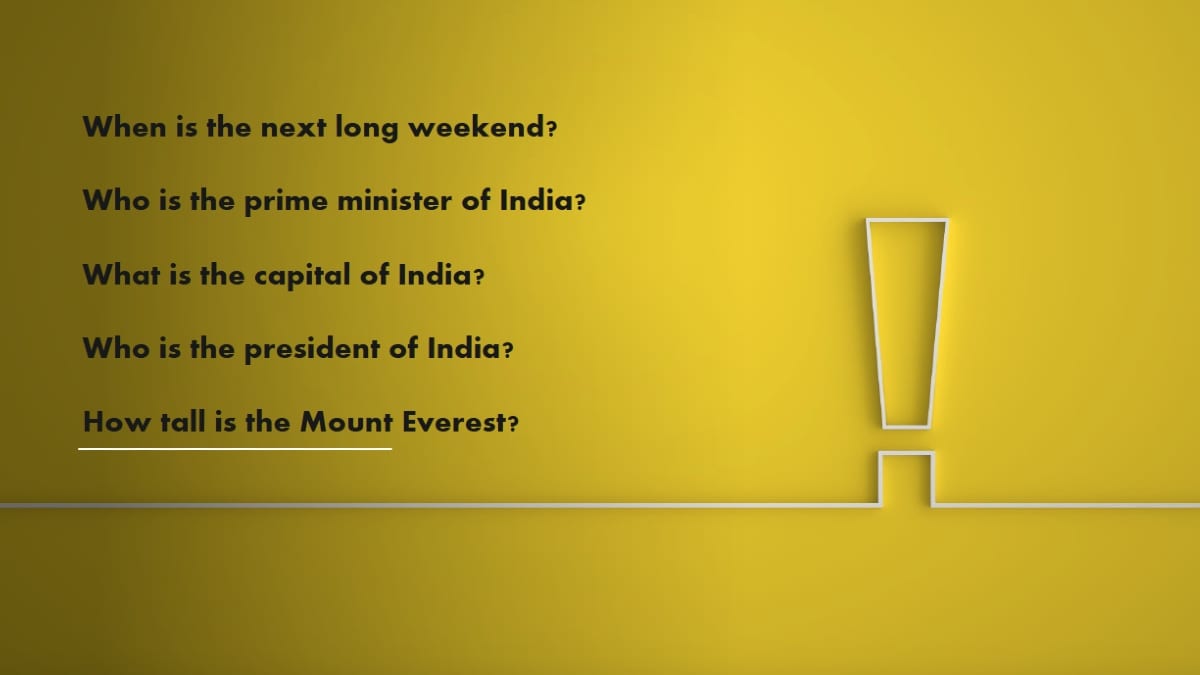 Most popular questions asked to Alexa during the lockdown

Alexa was also used by some users in enhancing their linguistic skills, as usage of foreign language learning skills reported a 15 percent increase, with French, Spanish, and Japanese being the most popular languages selections. Other users sent proposals to Alexa, with nearly every one minute, one user was found asking, “Alexa, mujhse shaadi karogi?” (Alexa, would you marry me?) or “Alexa, I love you.”

To get more details about the engagements took place with Alexa during the lockdown, Gadgets 360 spoke with Dipa Balakrishnan, Senior Manager for Alexa Experience and Engagement, Amazon India. Below are the edited excerpts from the telephonic conversation:

Did Amazon notice a significant increase in terms of the adoption of Alexa during the national lockdown?

Engagements on Alexa have been growing year-over-year. It’s constantly on an upward swing, though we don’t have country-level breakup that we can share. But in terms of what our study highlights is the new areas where we saw adoption or where we say behaviour changes over time.

There were a lot of questions that were asked to Alexa for the first time. None of us knew what coronavirus is earlier, so we had questions around the coronavirus outbreak. These were like what is COVID-19? What is coronavirus? We also saw a lot of questions that came in relation to other things that were happening in the broader environment. For instance, Ramayana and Mahabharata became the biggest hits on TV as a large number of people were watching those shows. We, thus, got some regular questions around Ramayana and Mahabharata trivia. It reflects what people were broadly experiencing in the environment and what they wanted to know while staying indoors.

What were the key changes in user behaviour observed between March 1 and May 31?

I think there are three broad areas where we saw changeable behaviour. Because we started working from home, we were trying to become more productive while working from home but the time between our work and play was sort of blurred. So that was one change we noticed in the user behaviour. The second change was on the part of learning — both with our children and ourselves. It was when you’re trying to educate and entertain your children while keeping them indoors as well as when you’re trying to improve your own knowledge and skills. And then the last one was around how people were trying to stay fit while staying home and doing things like seven-minute workouts that became more popular. 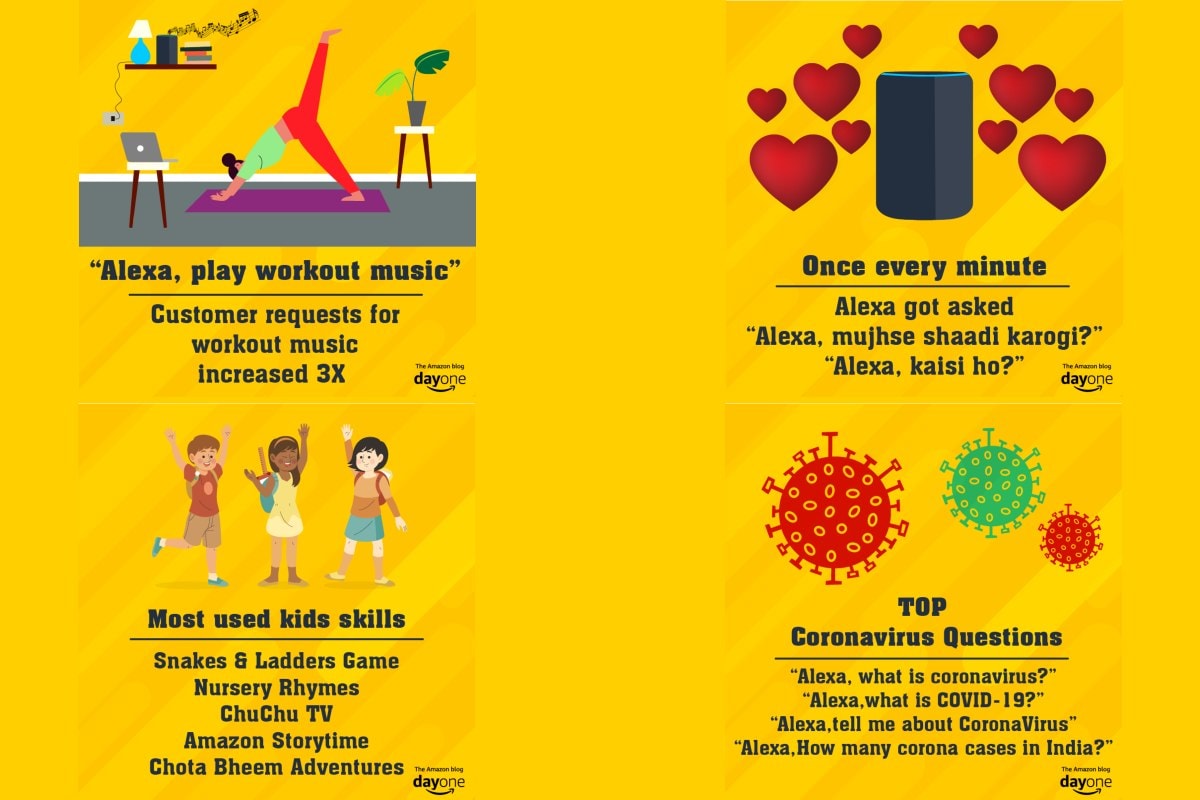 Were there any regional variations noticed?

Yes, we did notice. We currently support English and Hindi, and the peak around Shayaris was obviously much more prominent among the requests that we got from Hindi-speaking customers. Typically, we did see some differences based on the way people speak or the words they use of a language, but many of the popular requests were around the basic needs that are essentially universal.

How is the information being useful — apart from being generally interesting and fun?

At Amazon, our basic tenet is to work backwards from the customer, where we see interest, find that people are asking for certain kinds of features and people are asking for certain topics. This is important for us to know where the customer need is and how we will be able to fulfil that need. So, in terms of bucking up trivia knowledge for Ramayana and Mahabharata and other updates, all were through our understanding of customer needs. We, thus, look at all of those questions to determine how we want to innovate for the customer, and how we make sure that we’re meeting the needs that they have.

Isn’t it a little creepy that you’re recording what millions of people are seeing and sifting through every word to try and use it even for customer enhancements and understanding?

We know that privacy is important to our customers, and it’s extremely important to us as well. We’ve allowed users to control the kind of data that gets shared through Alexa. You can also ask Alexa why she collects user data. Similarly, the option to delete existing data collection is also provided. The data that we used here is on an aggregate basis, and it is not specific to any one customer or individual data.

How are we staying sane during this Coronavirus lockdown? We discussed this on Orbital, our weekly technology podcast, which you can subscribe to via Apple Podcasts or RSS, download the episode, or just hit the play button below.