Xiaomi has posted a notice on Mi Browser that provides a list of Redmi, Mi, and Poco phones due for a new MIUI update that will allow users to uninstall Mi Browser, Mi Browser Pro, and Mint Browser apps. The new notice comes a few weeks after the Indian government imposed a ban on Xiaomi’s browser apps, as part of a larger ban on apps from Chinese companies. The company recently released a clarification, confirming the release of a new MIUI version that would come without pre-installing any of the blocked apps. Xiaomi also claimed that 100 percent of Indian user data stays in the country.

Xiaomi still hasn’t provided an exact timeline on the update, though it mentioned that it would be rolled out “shortly”. Further, the list doesn’t include many of earlier Redmi and Mi devices. 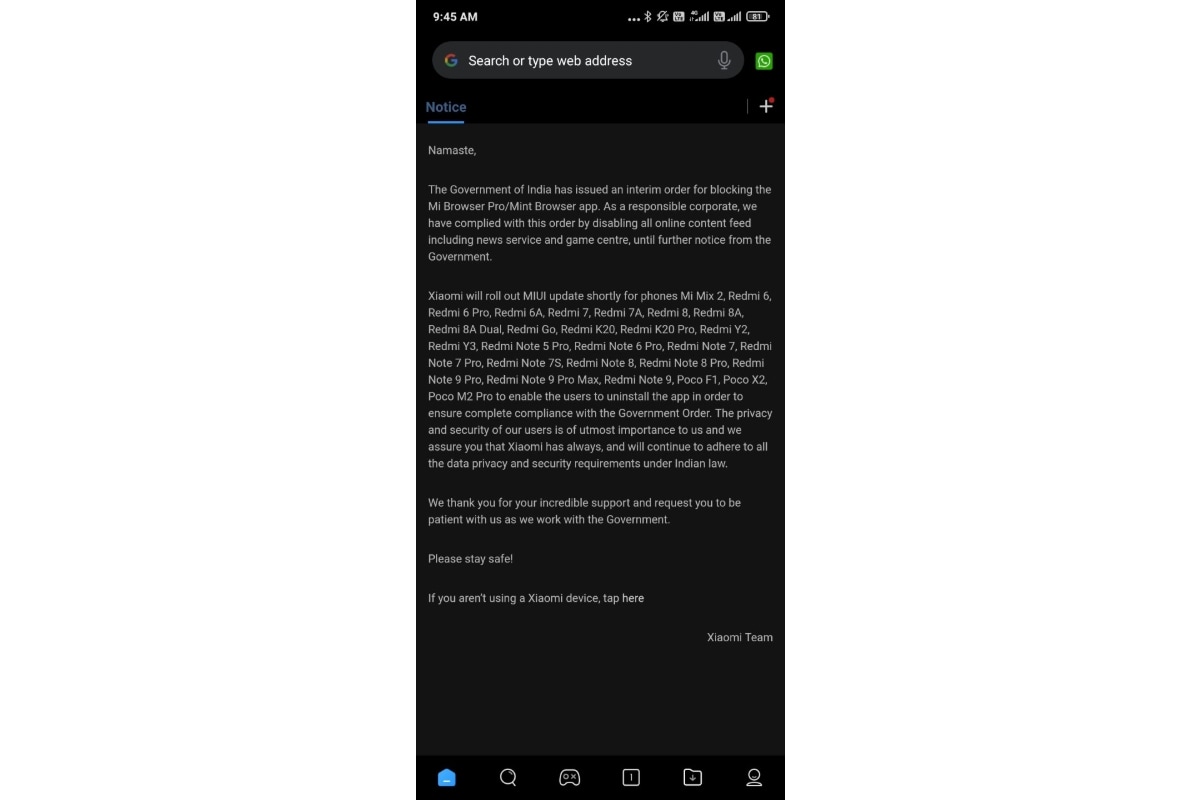 Gadgets 360 has reached out to Xiaomi about the availability of the MIUI update and getting clarity on its availability for devices other than the ones listed in the notice.

Apart from listing the select models, Xiaomi said in the notice that it had complied with the government’s order and disabled all online content feed on Mi Browser, including its news service and game centre. Users on Mint Browser, however, can still access recommended games and other content.

For users who don’t own a Redmi, Mi, or Poco device but have installed Mi Browser, Mi Browser Pro, or Mint Browser, Xiaomi has provided a separate notice that encourages them to uninstall the app.

The latest move by Xiaomi is a follow-up of its clarification posted on Twitter shortly after the ban on Mi Browser was imposed by the government. That clarification highlighted the development of a new MIUI version that would come “without pre-installation of any of the blocked apps.” However, the fresh notice for Xiaomi users importantly talks about the update that would enable users to uninstall Mi Browser, Mi Browser Pro, and Mint Browser.

Xiaomi may initially push a MIUI update with the ability to let users uninstall the banned apps and bring another software version at a later stage that would come without any of the blocked apps.

Similar to Xiaomi, Realme also last month promised to release a new software update that would remove the concerning “Clean up Storage’ feature from its devices. The feature is powered by Cheetah Mobile and is based on the Clean Master app that was amongst the initial 59 apps banned by the government in late June.

Should the government explain why Chinese apps were banned? We discussed this on Orbital, our weekly technology podcast, which you can subscribe to via Apple Podcasts, Google Podcasts, or RSS, download the episode, or just hit the play button below.